Prince Charming’s Quest for Love and Ecology in NYC

Have you ever wondered why Prince Charming always shows up to kiss the princess and break the spell? Go Green!, an original family musical (with a cast of five) answers that question in an modern-day fairy tale about Prince Charming who must choose between his passion for saving the earth or completing his birthday quest to preserve true love forevermore.

In the opening scene in Fairyland we learn that long ago the very first Prince Charming preferred cultivating his green thumb to romance. So a wizard decreed that he and all his descendants had to bestow a kiss of true love by their 21st birthday or true love would disappear forever. Every Prince Charming throughout the ages completed this birthday quest, but...uh oh! The current Prince Charming is more interested in saving the planet than damsels in distress.

Our modern-day Prince Charming, a/k/a P.C., is the leader of the ecology group, “Go-Go Green.” He must select a spokesperson to launch their new campaign for reusable grocery bags at a rally in Times Square at 2pm the next day, coinciding with his 21st birthday. His selection is from five finalists in the Go-Go Green ecology contest. P.C.’s parents are frantic that P.C. has refused to go on his birthday quest, so they secretly substitute the names of the descendants of five fairy tale princesses, Cinderella, Snow White, Sleeping Beauty, Ariel and Rapunzel for the contest finalists in hopes  P.C. will fall in love with one of them at their interview and bestow a true love kiss by his birthday the next day.

P.C. and Rosie, his talking-singing dog, go off to meet the “finalists” (princesses are all played by the same actress). First they meet Cindy, the snooty owner of a Madison Ave. shoe store that sells only plastic evening shoes. Plastic is hardly ecological, and Cindy is not a “friend of the earth.” Next is Snowflake, the battle-ax manager of The Wee Inn, a B & B for male midgets in the entertainment business. Although everything there is small--less waste, more ecological--Snowflake doesn’t actually like small things since she is very big, though she admits to having a crush on one of the little people. Snowflake’s candor gets P.C. to reveal to Rosie that he could fall in love with a girl who likes ordinary things. Then they meet Rory, the scheming owner of The Big Apple Costume Co. on the Lower East Side. Her factory has just been shut down for safety violations, and she downs coffee to keep awake (falling into deep slumbers runs in her family). Rory mistakes P.C. for a city agent, but when he tries to elicit her views on “greenbacks,” she touts her green costumes and tries to bribe him with “greenbacks” in hopes he’ll unlock the door. But when he won’t take the bribe, she pokes him with her giant hat pin. Rory’s off the list. The fourth “finalist” is Ariella, a shy fish feeder at the Mermaids and Monsters Aquarium on the Upper West Side and advocate of saving the whales. She reveals she’d rather be a fish than a human and is terrified at public speaking. She's a no go.

The clock is ticking. At the Ziegfeld Theatre on 42nd St. where Hairdo The Musical is playing, P.C. and Rosie find the wigmaker Zel in the basement workshop just before the rally. She is devoted to reducing waste and likes public speaking. She also makes wigs for cancer patients in her spare time. P.C. falls in love with her. As he leans over to kiss Zel, his parents arrive, interrupting the kiss. Suddenly there is an explosion and fire. Zel, P.C. and his parents reach the street safely, but Rosie is missing. Wind fans the flames, but P.C. goes back to save Rosie. When all seems lost, P.C. appears with Rosie, holding the special cancer wig, and P.C. gives Rosie a big kiss. As in “The Frog Prince,” Rosie turns into a beautiful princess. She reveals that eighteen years ago the evil Witch Hazel put a spell on her that could only be broken when rescued from “earth, wind and fire” by someone who bestows a kiss of true love. All are elated that P.C. has completed his birthday quest in time and continues the legacy of Prince Charming. At the rally Zel, the Go-Go Green spokesperson, launches their campaign for reusable canvas grocery bags, and P.C.’s parents, now supporters, announce a $50,000 gift. The clash between preserving tradition and following one’s heart is resolved in a fairy tale ending where Prince Charming can save the earth as well as a princess.

Note: We will customize the show to reset it in the city or town where the producing theatre is located. All scene locales will be renamed for locations in that city or town. The subtitle and a handful of lyrics will change accordingly.

We also encourage producers to partner with an organic grocery store because of our ecology theme promoting re-suable grocery bags. 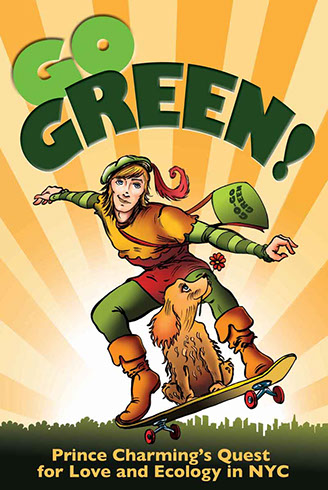 “This delightful and entertaining piece of musical theater has it all: a winsome book, witty lyrics that move the story along at a brisk pace, memorable music and a message that we can all benefit from hearing. While I think this play will be appreciated by adults as well as children (I loved it and I am almost 70 years old), I think every student in the New York City schools should have an opportunity to see it, enjoy it and learn from it.”

“I was completely enchanted with this delightful and professional production of Go Green! Prince Charming Quest for Love and Ecology.  The tuneful music of Mary Feinsinger expertly meshed with the equally relevant and humorous story and lyrics provided by Joan Sorkin. Add to this a winning and talented cast, and all who attended agreed, here’s a show for everyone that that really delivered!”

“Go Green! is a fun, musical and informative way to teach children about the importance of taking care of our environment.  Pinocchio may focus on the importance of telling the truth, while Peter Pan focuses on growing up (or not wanting to grow up), but Go Green! now takes the spot to teach about the environment.  Don’t be blue and see Go Green! It’s sure to lift your spirits.”

“Go Green! is totally delightful and any child will love it! It’s fun, lively, and imaginative. The actors are talented and enthusiastic, and the ecological message comes through without ever being preachy.  But what really carries Go Green! is the music. It’s absolutely brilliant and thoroughly entertaining. Whether you’re six or sixty-six, you’ll enjoy Go Green! from the opening song to the finale!”

“A very entertaining show, witty and with catchy tunes that stuck with me…high-energy and creative production…really top-notch talent.”

“I enjoyed the different musical styles used for each of the “princess” scenes.  The songs were upbeat and the lyrics were fun and appropriate for each character. The show moved at a brisk pace and kept the attention of both the children and the adults, which is very hard to balance in family-friendly shows.  I would recommend this as a great way for families to enjoy theatre together.”

“We loved Go Green! We would see it over and over if we could!”

“I love Rosie the best.”

“We were tickled by the cleverness of this timely and catchy musical!”

“I thought this would be just for kids, but I had so much fun waiting for each modern-day princess!”

“I liked how the princesses kept changing until the prince found the right girl who was the most green and she was right under his nose!”